We are grateful to the Yellowhead Institute and our Lands Theme for organizing this event as part of our Gonèk’e-Our Land webinar series, and to the Carleton Centre for Community Innovation (3ci) and the Social Sciences and Humanities Research Council (SSHRC) for technical support and funding. 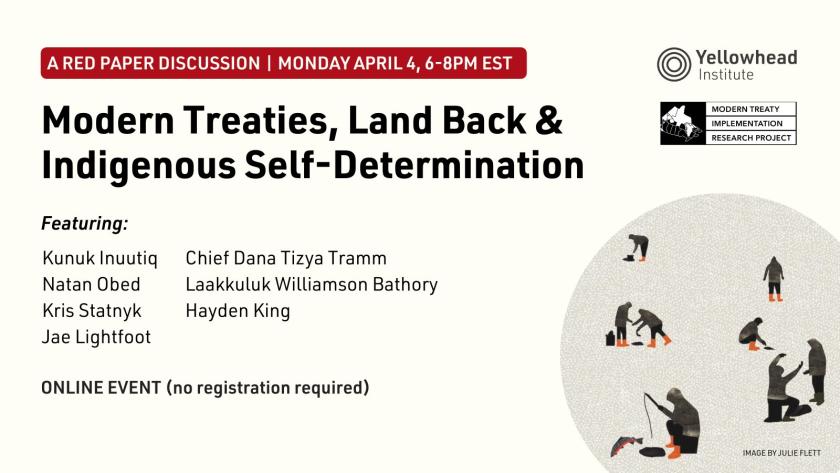 Treaty-making in Canada is older than the country itself. From the treaties Indigenous people made amongst themselves and those with early settlers, to the confederation-era treaties that allowed for the settlement of the country: the story of this place is, in many ways, the story of the treaty.

Despite those early treaties being ignored and used as tools of dispossession, Indigenous resistance led to the emergence of so-called “modern” treaties in the 1970s into the present. Modern treaties are comprehensive in scope, often include pathways for self-government, and require long-term inter-governmental relations. But similar to the earlier confederation-era treaties, the lack of implementation is becoming a challenge.

A critical area where there is a lack of implementation is around lands and resources. Even as the modern treaties presume to “settle” disputes around land tenure, clashes emerge around land use planning, hunting economies, and resource development, among other issues. These conflicts are disputed in courts or on the land.

But this provokes the question: what does land back look like in modern treaty territories?

The Yellowhead Institute and the Modern Treaties Implementation Research Project hosted an online discussion on Monday, April 4 from 6-8pm EST featuring an incredible panel of Gwich’in and Inuk leaders who answered this question, and more. You can view the webinar recording on YouTube here:  https://youtu.be/nzJC3cvg5po